By Lis L Griffin on | Categories: art, my art journal

Her cancer had come back.

She had been cancer free for over five years and now it was everywhere.

I returned home to be with my dying mom.

One day she was turning over in bed and we heard a loud snap – we called the hospice nurse and she suggested taking her into the hospital – we called an ambulance.

She had broken her arm and didn’t even realize it.

I didn’t want to know it at the time, she was very close to death – but I probably did know it

They fixed her arm and sent her home

Then a few days later her breathe was labored

I watched the life drain from her – she became blue.

Her end was my beginning

After she died, I had a series of haunting night dreams, the kind that make you sit up in bed.  I was compelled to do something with those images from my dreams.

It’s been over 28 years since my mom died, I’ve spent that time thinking, talking, researching, creating, observing and creating artwork. Wondering what is grief, death and life is and how I and we all deal with it all.

There is no escaping the harshness of life.

There’s no escaping the timing

And there’s absolutely no way around the tragedy of living

We all walk around with unresolved grief, loss and trauma

What we do with our pain and how do we hold beauty and the pain of life at the same time?

I’ve come to believe that art inspired by and created from hurt and pain can touch us in ways that we never thought it could.  At the same time, such art may make it easier to face and learn to be with our own pain.

When I’m crossing the bridge, I get perspective and wisdom.

Lost in Translation – my dyslexic journey

By Lis L Griffin on | Categories: movies and tv shows, my art journal

I’ve always said, if I ever have a boat, I will call it Lost in Translation. Because, even when we speak the same language, words and meanings get misinterpreted. As an funny example, look at this he scene from the movie Lost in Translation, where Bill Murray plays the star in a whiskey ad in Japan. The scene is with a Japanese director and interrupter and Bill Murray.

I and my family have hosted kids from Japan and Germany.  Even when they felt like their English was very good, they all understood less than they thought because your  language is all about nuance.

As a young working adult, I decided to study the Italian language. But as I progressed, my teacher thought I might be dyslexic. At the time, the teacher’s comment kind of made sense.  As a kid they labeled me a slow-reader, therefore learner.  But I was never formally diagnosed.   I stopped taking Italian because I had just gone to Italy and soon after that trip my mom died.

Anyway, I didn’t look in to my teacher’s suggestion that I could be dyslexic.  That is, until years later when I returned to study of Italian  because I started the quest of getting my dual-citizenship and wanted to look into spending part of my time in Italy.

To begin my renewed study, I found a local ten – week course in which the teacher used a traditional textbook.  The small group of other students seemed a bit perfectionistic, which was intimidating.  I made it up to the 7thlesson and I then I just didn’t want to go anymore.  While trying to focus on the next lesson, a dread came over me  because this very structured approach made me feel like I’m never going to “get it” Remembering what my former Italian teacher said, I wondered if I really was dyslexic.

So, like a train shifting tracks, I started researching dyslexia instead of practicing Italian.  I learned I had many of the benchmarks of the learning disorder.

It turns out that 15% of the world’s population has dyslexia and many kids and adults aren’t identified.  But more research has been done since I was a kid.  The result?  We’ve learned that for centuries, dyslexics have invented strategies and workarounds to navigate school, work, ands life in general.  And now, many resources are available to help.

I still want to learn Italian, but I’ve realized that my approach has to be different than the traditional class room.  Scouring the internet, and I’m in a DIY dual-citizen group they also have a subgroup for language learners.  I’ve found a lot of interesting apps for mobile devices and computers, all of which take new approaches to language instruction.  I like Duolingo, Clozemaster, Busuu, and  Fluent Forever – each for different reasons.  The Linkword Languages app is specifically for dyslexics but anyone could benefit.  There’s even an object-spotting game called June’s Journey which you can play in several languages including Italian and German.  What a great vocabulary builder!  Of course, all have plusses and minuses, and some flow better than others.  But I practice with at least one of them every day.  I began to like learning again – so much so that I recently signed up for another class – but this time, it’s a literature class with a different teacher and a different group of students that know I’m dyslexic.

So, my strategies are now a bit eclectic.   I use passive listening, such as podcasts and music playlists on Spotify, and the app lyric training as well as short videos that have the Italian subtitles on youtube and the language learning apps I use listed above. I also need to practice speaking, and so I met an Italian teacher on the web via an app called iTalki   where you can meet on Skype and have a lesson.  After my first lesson, she said that I knew a lot and I needed to have courage – or maybe she meant confidence – to speak and share what I know.

A few lessons later, I was explaining in Italian about my quest for Italian dual-citizenship, and how success depends on accurate genealogy through my maternal grandmother.  Which is a 1948 case. It seemed like I was talking forever.  But when I finished my story, and asked the teacher (in English) if she had understood me, she said, Yes!!

Willingness to get Lost

I grew up in the midwest and every year my family drove back to upstate New York – when I look back that was a long haul.

This particular time I was around 9 ish. All my cousins and aunts and uncles were at my grandpa Nic’s house. So my younger cousin who was maybe around 5-7 and I decided to go for a walk around the block.

We held hands and made our way around the neighborhood. As it turns out we crossed a number of blocks and we ended up front of the neighborhood store Tammaro’s, and continued walk past the owners, because we thought we were on the right path.

They knew who we were so they called my uncle.

We didn’t think we were lost.

I also remember our parents and aunts and uncles bricking about how this happened.

We just wanted to go for a little walk.

When I travel or hike I keep in the thought in the back of my mind that I have to have a willingness to get lost.

Even though have a plan and a map, sometimes, you make a wrong turn and are lost but then you have come across the amazing hole in the wall restaurant or see a family of deer on your path.

Be ok with being lost for a while.
It’s a way to practice living with uncertainty or ambiguity.

Many years ago, in a college art class, I made a charcoal drawing of a form with a black hooded cape looking into a mirror. Where the face would be, it’s solid black. Within a few years, that drawing was forgotten.

My mom died of metastasized breast cancer in 1992. A year or two later, I found myself using a black-hooded, caped figure in an art photograph. The series of images of the hooded figure is called Traveler’s Embrace , which looks similar to the drawing I had made many years before. Traveler’s Embrace is part of a larger body of work Inside the Belly of the Whale. 2

I still have the black hooded cape that I used in that photograph. I recently brought it out again. I had one last photo I wanted to make; one last image I needed to express. I laid the cape down among some fallen trees, so that it almost looked like a casket. And then, coincidentally, I found the old charcoal drawing I’d done in college.

The caped figure has always been with me, making its presence known in my art from time to time.

To me, the cape always seemed like a piece of clothing that a traveler would need. Using this cape had a way of making me feel prepared or maybe it was a bit of protection.

Now, I believe is the time to lay it down; It feels like laying down a burden.

I do so, in the hope that someone else will use it. I’m at a fork in the road on my journey, and where I’m going, I won’t need it. 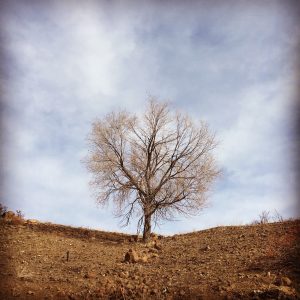